225 Years of the Two Bridges Hotel

This article appeared in Dartmoor Magazine issue no.137, Winter 2019, and is reproduced with their kind permission. Includes excerpts from “Air Like Champagne” – a history of the Two Bridges Hotel by Alex Mettler.

One of my responsibilities as editor of this magazine is to make sure that every article published has a good reason for being there. Each one (ideally) has to be timely, or seasonal, or mark a particular event or anniversary. So I’m always on the lookout for landmark dates to celebrate.

While relaxing with a coffee at the Two Bridges Hotel one morning, sunk deep into one of their marvellously comfortable sofas, I found myself idly flicking through historian Alex Mettler’s booklet Air Like Champagne (a short history of the hotel, published in 2015 to mark twenty-five years’ ownership by Warm Welcome Hotels, and revised in 2018). Turning to page 2, I was delighted to read the following passage: ‘By 1772 the turnpike bridge had been constructed across the Dart at Two Bridges and by 1794 Francis Buller had constructed the inn near the site. The inn bore the name of the Saracen’s Head…’

A quick calculation gave me the answer I wanted: this year – 2019 – marks 225 years since the first firm record of a hostelry on the site now occupied by one of the moor’s best-known and most-loved hotels.

In terms of writing an article to mark the occasion I can do no better than quote directly – and extensively – from Alex’s booklet (with his permission). It is hard to condense 225 years of history into a short magazine article and decide on which aspects of the hotel’s history to feature – its early years as the Saracen’s Head, with tales of cattle fairs, hunts and an in house brewery? The suggestion that the inn provided accommodation for masons and carpenters building the prison at Princetown? The disastrous fire that struck in May 1866 under the tenure of Elizabeth Connabeer, a widow with four children, running it on her own? The story of Seafield Preparatory School being relocated to the hotel in the Second World War (an account of which, by Richard MacDonnell, appeared in Dartmoor Magazine issue 62 in 2001)? Or maybe it would be good to take a look at the ‘Visitors of Note’: names such as the Westcountry novelist and collector of folk songs Sabine Baring-Gould, the author and poet Eden Phillpotts, the film director Anthony Asquith; and Vivian Mary Hartley (later the actress Vivien Leigh) who met her future husband Leigh Holman at a Hunt Ball at the hotel in 1931.

It’s a tough choice – but let’s start by ‘setting the scene’ and returning to the end of the eighteenth century. 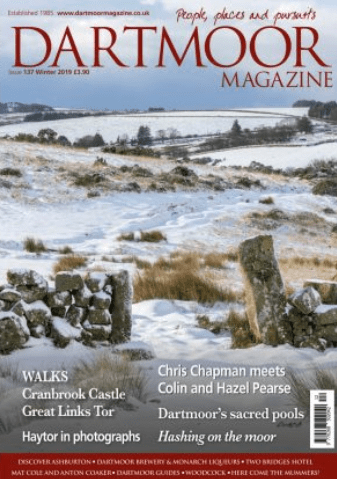 Situated in “snug hollow” and set in the stunning landscape of Dartmoor, within one mile of the eerie wondernesss of Wistman’s Wood, and tucked into that gentle spot next to the River Dart, the Two Bridges Hotel owes its existence to an Act of Parliament enabling the construction of a turnpike road from Tavistock, through Taviton via Two Bridges to Cherrybrook and onto Moretonhampstead. The year was 1772 and the road, supported by tolls for its maintenance, opened up the moorland to easier travel for both leisure and trade, replacing the trans-Dartmoor packhorse track in use at that time. It was the opening of this turnpike road that prompted Sir Francis Buller, some twenty years later, to build a public house at Two Bridges. The place name derivation of “two bridges” there appears to be a choice of it being based on two bridges fairly close by, crossing the Rivers Dart and Cowsic, or, the more likely, from the sixteenth century “Tobrygge” meaning “at the bridge”.

The twenty-first-century two bridges are of more recent construction, the first being the “new” turnpike bridge built in 1792, just west of the present hotel, and the more modern “main road” bridge of 1931.

Francis (later Sir Francis) Buller was born at Downes, near Crediton, in 1746, and was said to be the youngest man ever to be created an English Judge at the age of 32. In 1787 he constructed the mansion of Prince Hall, now run as a hotel, a mile or so downvalley, and so was well placed to take advantage of the potential benefits of the new turnpike at the nearby crossing point of the West Dart river.

It is possible that this inn replaced an earlier ale-house of some twenty years earlier, the house having allegedly refreshed the traders at the potato markets held at Two Bridges, this site being marked on Donn’s map of 1765. The Revd John Swete, in his wonderful bound work of handwritten text and watercolours, called Picturesque Sketches of Devon, shows an image of the early inn, which he visited in 1797, describing it thus:

On the public road the little inn had been a few years ago erected by Sir Francis Buller for the accommodation of the traveller on the moor. The spot was most judiciously selected, being nearly at the junction of several roads, proceeding from Plymouth, Tavistoke, Ashburton, and Moretonhampstead, and at a central stage as it were from them all.

It is very clear that Swete thought the building of an inn at Two Bridges was a master stroke by Francis Buller and that the plans that were discussed between them foresaw a small township growing up at this spot with the initial additions of a wool “manufactory” and a church. Buller had also instituted the Fair at Two Bridges only two years previous, c1795. According to Crossing in Folklore and Legends of Dartmoor John Swete had visited Two Bridges Fair in 1795 between six and seven pm & found the women had in great measure withdrawn, & the amusement of the men seem’d to be confined to wrestling & drinking.

The tradition of holding fairs at the inn continued into the following century, when John Hamlyn, thought to be in residence from at least 1841 to 1848, placed an advert in the Exeter Flying Post (also taking the opportunity to advertise his ‘wonderful inn’).

Several landlords (and one landlady – see introduction) came and went over the next few years, with the inn appearing to hit something of a low point in the midnineteenth century (under Mrs Connabeer’s tenure) when one visitor commented:

Now having been right regally entertained at the Red Lion in Ashburton… do not imagine that a similar reception awaits you at the “Two Bridges”. If you have any fear of what is termed roughing it, turn back from whence you came…

It seems as if the inn’s fortunes took a turn for the better at the very start of the twentieth century when it came into the hands of the Trinaman family. Over the next twenty-eight years the family extended the premises and put the hotel firmly on the map: ‘The new incumbent… was Henry Trinaman, a young man from Bow, Devon, born c1854’ whose elder brother William is recorded as retired and living at Two Bridges Cottage, near the hotel in 1891.

Henry had moved into the hotel some time around 1893 and began his tenure by adding an extension at the southwest end of the hotel, completed in 1894. Trinaman himself appears to have fitted in well with the customers and visitors and soon had his own nickname.”Trinny” is described by Thomas C. Bridges in his short stories, entitled Trinny and Salmon Days on Dartmoor written in 1938 and published by Blackwood in 1946, where he describes Henry Trinaman as  “the stoutest, kindliest, most genial host that ever stood behind a bar…” Talking about the inn as it existed in 1907 Bridges writes, “…A delightfully friendly atmosphere pervaded the place. Everyone knew everyone else, for the same people came at the same dates year after year…”

I was interested to read about the coming of motorised transport to the moor (prior to the arrival of the railway from Yelverton to Princetown in 1883 access to Two Bridges was, of course, by foot or horse power). ‘From the early twentieth century motoring and motor holidays became slowly but increasingly popular and Princetown, and Dartmoor generally, would have seen a greatly increased number of such visitors. This easier access must have been manna from heaven for the hotel and the Trinamans, although motor traffic seems slow in coming. According to Thomas Bridges the traffic in 1907 was light:

In those days a motor-car was hardly seen on Dartmoor, trippers were unknown, and the fishing was good… but that a few years later… Those were good days, days one would like to live over again. Now the Dartmoor roads are tarred, huge motorcoaches thunder along them, the little  Saracen’s Head is now the Two Bridges Hotel, double or treble its former size. Praise be, the Moor itself remains unchanged… Man and the motor have not conquered the wilderness, nor never will…

At some point between 1914 and 1919, according to the contemporary Kelly’s Directories, the name had seemingly become established as the Two Bridges Hotel. And so – now that the Two Bridges Hotel has ‘arrived’ in the story – that’s where we must leave it. It is worth mentioning, though, that in 1931, when the new road bridge was being constructed, it was thought not to be to the advantage of the hotel as the traffic would no longer be forced to pass in front of the building. In an interview with the Western Morning News the manager stated “that when the bridge was completed it was intended to lay out a pleasure ground and hard tennis courts in front of the hotel to increase its amenities for visitors”.’

A visit the Two Bridges Hotel at any time of the year will quickly reveal that the ‘new’ road bridge has done anything but deter visitors!